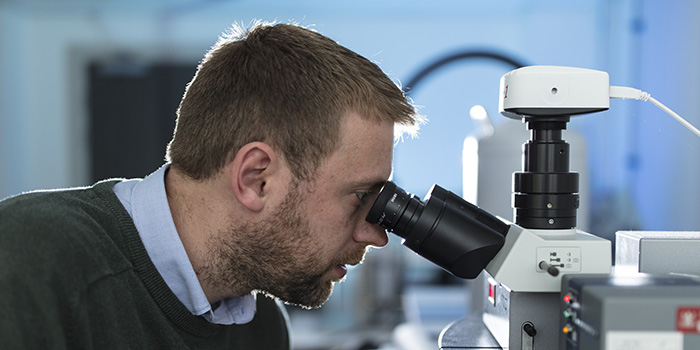 Overview
Light (optical) microscopy allows resolution up to 1000 times magnification allowing fine detail of a sample to be viewed at the micrometer scale.

JBL Science has a range of microscopes to suit different needs. Our stereo microscope uses reflected light to perform 3D visualisation of a sample whilst our digital microscope enables image processing via specialist software. In addition we have a temperature controlled stage to allow temperature-dependent processes to be monitored and captured.

Linking microscopes to other instrumentation, e.g. Raman/fluorescence spectrometers allows spatial resolution of chemical features. Our range of microscopes and instrumentation ensures we can visualise a variety of samples using both transmitted and reflected light.
Technical Detail

Light microscopy uses a lens to focus the light from an object and enlarge the image. A second lens in the eyepiece then further magnifies the image to give the final image. The total magnification possible is the product of the two magnification processes and typically up to 1000 times magnification cann be achieved.

The use of media to provide an interface between sample and optic with a greater refractive index than air (water/ oil) allows greater magnification to be achieved than would otherwise be possible.

Bulk samples can be visualised by using reflected light, but if a sample requires vertical resolution it must be thinly sliced (sectioned) and transmitted light used.

Modern microscopes often use digital imaging via a CCD detector to allow image processing and manipulation.

The technique can be employed in a wide range of application areas which require visualisation of solid samples down to the micron-scale such as electronic manufacture or failure analysis of materials.

However, light microscopy is widely used in the biological sciences for visualisation of samples ranging from tissue samples through to whole organisms. It is also commonly used in the geological sciences to investigate the morphology of sedimentological samples, which can provide insight into the origin and composition of the sample.

Specific sample requirements will depend on the type of microscopy being used. In general, any solid sample can be processed to allow imaging via one or other type of microscopic technique.

Contact us now for more information or to discuss your bespoke research needs...